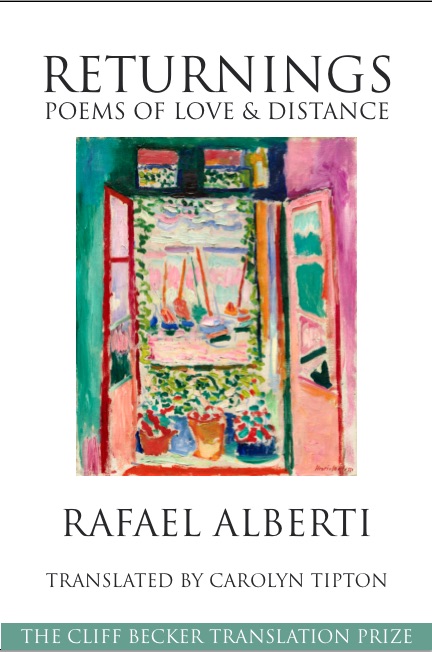 Returnings: Poems of Love and Distance

by Rafael Alberti
translated and with an introduction by Carolyn L. Tipton

“In those years of Argentinian exile, my distant Spanish life would present itself to me down to the minutest details. The memories…would invade me hour by hour, making of my poem, not an elegy for things that were dead but, on the contrary, a living presence, returned, of the things in the world that don’t die and go on existing in spite of their apparent distance.” Rafael Alberti

Returnings: Poems of Love and Distance is a book of luminous evocations of people and places written by a one of the twentieth century’s greatest poets.

Forced to leave Spain after the Civil War, poet, painter and political activist Rafael Alberti endured almost four decades in political exile. The poems that make up Returnings are Alberti’s creative response to what was for him both a personal and a national tragedy.

Yet these are not only poems of loss. In the sensual, musical, varied lyrical style Alberti is famous for, the poems in Returnings celebrate the enduring beauties of the Spain he loved—its characters, its landscapes, its vibrant culture.

And they celebrate the poet’s rich personal experience. Childhood and youth; first love and mature love; struggle, flight and banishment: Alberti brings his memories powerfully to life, recreating them with an intensity that bridges distance and erases the passage of time.

Buy now from your local bookseller or order from these outlets:

“In the reinvention of yesterday through color, scent, and song, Alberti’s revisitations pulsate with the nostalgia of love—of youth, of spouse, of homeland. Indeed, his years of exile seem to have deepened the hues of his bucolic and maritime imagery, allowing him to fashion a vibrant present of former times. Carolyn Tipton´s moving translation recreates Alberti’s powerful imaginings and musicality through an even cadence and chiming assonance, luring us into its rhythmic magic.“— Lisa Rose Bradford, Winner of the 2011 National Translation Award

“Written between 1948 and 1952 while Rafael Alberti was living in exile in Buenos Aires, Returnings is a particularly moving collection by one of Spain’s great literary figures. With an unapologetic mixture of sentimentality and melancholy, Alberti’s poems evoke a lost past through striking, sensory reflection. Carolyn Tipton—who received the National Translation Award for her translation of To Painting: Poems by Rafael Alberti—was awarded the Cliff Becker Translation Prize for Returnings, and her poetic sensitivity is nothing short of exceptional. Tipton’s English translation of these powerful poems attunes us to Alberti’s romantic and vibrant recollection of former times.” —Judges’ Statement on Returnings when they announced the National Translation Award long list.

LOVE RETURNS AS IT ONCE WAS

In those days you were statuesque and golden,
risen out of sea-foam, glittering.
You seemed a body flung out
from the center of the sun, abandoned
by a billow on the sand.

Everything was fire in those days. Around you,
the beach blazed. Seaweed, mollusks,
pebbles sent against you by the surf—
all were reduced
to flashing shards of light.

Everything was fire, shooting stars, the beat
of the wave of heat inside you. Whether
my hand began it, or your lips,
blind sparks, flying, whistled through the air.
Season of flame, of dreams fully consumed.

Your dazzling foam engulfed me in those days.

For many Spanish readers, Returnings is their favorite work by Rafael Alberti. For the poet, too, Returnings always held a special place in his heart. Here, through acts of his poetic imagination, Alberti not only returns to his past, but his past also actively returns to him.

“In those years of Argentinian exile,my distant Spanish life would present itself to me down to the minutest details; the memories–places, people, desires, loves, sorrows, joys–would invade me hour by hour, making of my poem, not an elegy for things that were dead, but, on the contrary, a living presence, come back (to me) of the things in this world that do not die but go on existing, even in spite of their apparent distance. (It was a) book without end, then, like a chronicle of the best and worst moments of my life, of those for whose return I would always hope.” Rafael Alberti

Alberti’s poems of these moments are presented to us in a particular way. Like To Painting (A La Pintura) and like the great works of his youth, Sailor on Land (Marinero en tierra) and Concerning the Angels (Sobre los angeles), Returnings has been structured with great care. It is divided into three parts.

Part One, untitled, includes poems in which memories of the poet’s childhood, youth, and early adulthood return to him.

Part Two, titled “Love Returns”, contains love poems in which Alberti recalls the early days of his affair with his first wife, María Teresa León. Two is the section of which Alberti was clearly most fond. It is these poems which so many of his Spanish readers know by heart, drawn to them not just for their beauty, excitement, and tenderness, but also because it is here, more than in other parts of the book, that memories not only return, but come alive again. These twenty poems, found at the center of the book, are truly the heart of Returnings.

In Part Three, again untitled, it is the places, friends, and emotions of Alberti’s more recent past that return to him.

Until now, Returnings has never appeared in its entirety in English. However, isolated poems from the book have continued to appear in anthologies of Alberti’s work in translation throughout the decades since its publication. Many poets, including Kenneth Rexroth, Ben Belitt, and Mark Strand, have translated poems from Returnings.

What explains the continued appeal of this book? A longing for the past is, of course, a deep-running current in human nature. Moreover, especially now, in this present alienating age of electronic ubiquity, regressive politics, and a rapidly disappearing natural world, many of us have begun to feel that we, too, exist in a kind of exile.

But it is not just our identification with Alberti’s longing and his sense of exile that causes us to continue to embrace Returnings. It is the delight readers share with him when he succeeds at truly re-experiencing what had been lost. When melancholy elegy temporarily gives way to gladness, we feel we have won, too.

Now that at last the poems in Returnings are appearing all together in English for the very first time, I hope more readers will finally be able to experience what Alberti’s art was able to shape from his exile. I wish readers joy in their discovery of Alberti’s vivid evocations of his lost, and re-found, world.