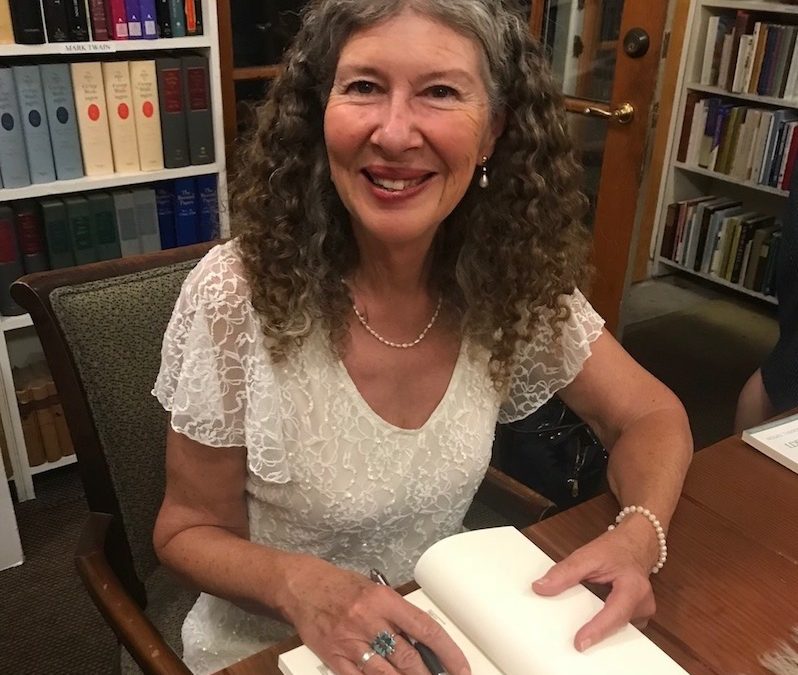 Bay Area poet Carolyn Tipton was born and raised in Berkeley, California. She holds a Master’s Degree in Creative Writing from Stanford University and a PhD in Comparative Literature from UC Berkeley, where she currently teaches. Her most recent book, The Poet of Poet Laval, is a collection of forty-one original poems that touch on a wide array of subjects including travel, history, nature and art. She’s published two award-winning translations of books by Spanish poet, Rafael Alberti. (To Painting, National Translation Award 1998; Returnings: Poems of Love and Distance, Cliff Becker Translation Prize 2016.) Her poetry and translations have been published in many journals including The Partisan Review and in anthologies including Norton’s World Poetry.

In one of the poems in your new collection, The Poet of Poet Laval, you say the eponymous poet is “a useful poet, writes poems/that seed the heart…” Is that your view of the role of a poet?

CT: I think poets have many roles, but that’s probably my personal favorite. As a reader, I most like poems that make me feel that things are opening up for me or that give me a sense of possibility. Seamus Heaney writes about this in his poem “Postscript”. He describes how the “big soft buffetings” of wind hitting the side of his car “catch the heart off guard and blow it open.” If I can do that as a poet, I think that’s useful.

Travel is a frequent theme in this collection. What does travel mean to your poetic imagination?

CT: Most of the time in your life you go around doing things by rote, not noticing things because you see them all the time. When you travel, everything is new and different and you naturally pay more attention. It’s the poet’s job to pay attention. We note things, we attend to them and then people read our poems and it’s a revelation to them because they see things anew.

So travel helps poets do their job! I write a lot when I travel and I find it makes writing easier. I even love trips I imagined but didn’t end up going on, that sense of the road not taken. Travel is possibility to me. It always feels like a more intense way of living.

This collection is, among other things, a sort of tour de force of poetic form. What attracts you to such a wide variety of forms and poetic strategies?

CT: Form adds another dimension of meaning to a poem. Different subjects call for different forms. In the “Sonnet to Chagall”, for example, I was playing with the contrast between the classical form and Chagall’s modern painting style. There are poems in this collection with two different voices, such as “The Duende and the Muse”, which is written in the form of a dialogue representing two opposing views. “Running with the Maenads” is all one sentence because I wanted it to feel breathless, like running to the limits of your energy, until you run out of steam.

You’re are a poet with a strong sense of history. Several of the poems in the collection are based around historical events. How does history inform your work?

CT: Mainly when I’ve written about history, it’s been about the Spanish Civil War. It’s a conflict that has always intrigued me. I first learned about it through the work of Stephen Spender, who fought in that war and whose translations of García Lorca were the first I ever read. This was during the Vietnam War, and it struck me that his war was so different from the one we were involved in, its aims were much purer. It caught my imagination.

Years later, when I started translating Rafael Alberti and got to know him well, my imaginative engagement with the war deepened. It was the event that dominated Alberti’s entire life. He helped to bring about the Republic, he fought for it, then he went in to exile for forty years after Franco took power in its aftermath. I heard Alberti’s accounts of these experiences first-hand and I translated many poems by him inspired by them. Doing this work inevitably had an impact on my own poetry and imagination.

Several of your poems re-tell the experiences of other people—”Sid’s Story” is one example. What is the poetic benefit for you of speaking for or through others?

CT: It’s sort of like translating Alberti. These huge, dramatic experiences aren’t mine, but I can write about them. Alberti had a much larger life than mine, for instance, a more tragic life that played out on a world stage. He is a bigger personality than I am and he had so many different writing modes. He wrote scatological poems, which I don’t. He could be funny and extremely tragic.

I’m none of those things. But when I speak through him or through the voice of the Abraham Lincoln Brigade veteran Sid in “Sid’s Story,” I can inhabit those other voices. I wouldn’t have said those things, but writing them stretches me emotionally and formally. My voice is amplified. It enables me to paint on a larger canvas.

Nature—particularly the loss of the natural world—is a key theme in this collection. How does this concern for nature chime with your other poetic intentions?

CT: Animals enrich my sense of the world—it goes back to that sense of opening and possibility. It’s a bigger, more beautiful place because they exist in it. The world would be more thin and more paltry without them. I feel the same way about trees. They don’t give me stories or new ways of telling stories the way people do, but they give me a broader perspective.

I’m very concerned about the disappearance of the animals and plant species that are being driven out of our world. I hope my poems give voice to that concern, which I know many share. It’s more important than ever the we consider the natural world and what we’re losing. The poet’s task—my task—is to bring attention to things and so I try to do that with my work.

What do you think can poetry do for us in these troubled times?

I’m grateful to poems that give me reasons to go on, that show me all there is to appreciate, and remind me of some of the eternal rhythms—seasons, weather. There’s so much to despair about, and the losses keep mounting, and sometimes all we think about is everything that’s wrong. It crowds out everything else.

Poems have the power to make me shift my focus back to the things I value, back to beauty, back to wonder. Pound once said that he thought that prose was often diagnosis, but poetry, at its best, could be cure. I’m not saying that poems can’t describe what’s wrong, or bear witness to tragedy, but I am saying that, for me, poetry can make me take heart again, and that is what I most value it for.

The Poet of Poet Laval (2019) is published by Salmon Poetry Press.

Marta Maretich is a the author of three novels (The Merchants of Light, The Bear Suit and The Possibility of Lions) and serves on the board of the Upper Wimpole Street Literary Salon for Women Writers. She lives in London.

All material on this site ©Carolyn Tipton 2019.
All rights reserved.